Sources: Bloomberg and Sprott Asset Management LP. Data as of November 30, 2022.
*Performance for periods under one year not annualized.

November saw modest rebounds across most asset classes, including the equity, bond and commodity markets, providing a partial reversal in the larger drawdowns of 2022. Physical uranium did not perform as well as other sectors in November, despite having posted relatively notable performance throughout 2022. The U3O8 uranium spot price fell from $52.27 to $49.43 per pound in November, a 5.42% decrease.6 Uranium has increased by 17.40% on a year-to-date basis as of November 30, 2022. Uranium mining equities were mostly flat. Year to date, uranium miners have declined 6.84% as measured by the North Shore Global Uranium Mining Index.

Growing expectations that the Federal Reserve would slow the pace of its rate hikes helped improve market sentiment. This was accentuated on November 30 when Federal Reserve Chairman Jerome Powell said, “The time for moderating the pace of rate increases may come as soon as the December meeting” during a speech at the Brookings Institution in Washington.7 After the announcement, many asset classes, including uranium equities, reacted positively. Physical uranium, as measured by the U3O8 spot price, did not respond as positively to the Fed news. 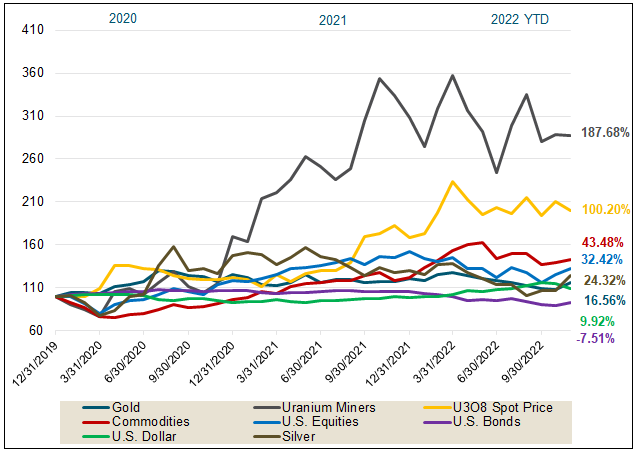 Positive news continued to flow for uranium and nuclear energy in November, supporting our view that nuclear power is no longer on the sidelines of international energy and climate conversations. The United Nations Conference COP27 took place this month, seven years after the signing of the Paris Agreement, and saw world leaders convene to discuss their collective commitments to limit global warming to below 2, preferably to 1.5 degrees Celsius compared to pre-industrial levels. For the first time, there was a focused pavilion on nuclear energy led by the International Atomic Energy Agency (IAEA). This is a positive development given that at COP26 last year, nuclear energy was “snubbed” with the climate summit’s refusal to acknowledge nuclear power’s role in global energy production.8 At COP27, the global nuclear industry released a joint statement to “urge decision makers to acknowledge and support the need for increased nuclear energy generation” and gave a call to action for investments in nuclear new builds, nuclear innovation and more.9

In terms of tangible outcomes, COP27 ended with an agreement mostly affirming the decisions from the previous COP meetings. However, the agreement also changed the language to increase “low-emission” energy sources instead of only renewables.10 This development favored nuclear energy, which has long been identified as critical to decarbonizing energy supplies away from fossil fuels. However, as renewable energy sources have seen substantial investments in recent years, we believe nuclear power must be further prioritized. Nuclear energy has the highest capacity factor versus traditional and alternative energy sources and can complement renewable energy sources’ intermittency with reliable baseload power. 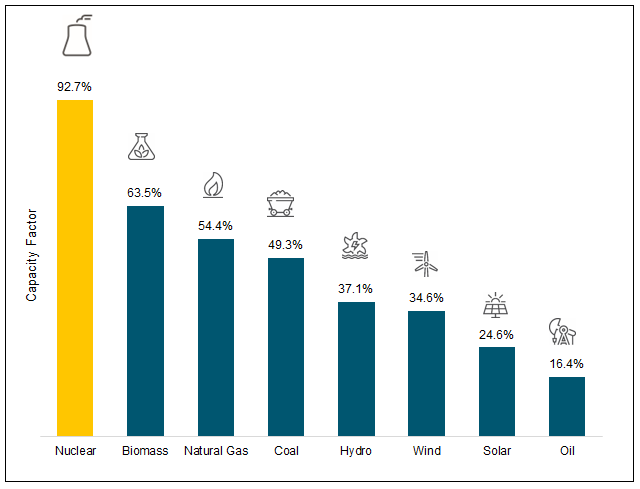 Two uranium mining companies made important announcements on project restarts in November. Cameco Corp. (Cameco) announced that its McArthur River mine has restarted, with the first pounds of uranium ore milled and packaged in November.11 Cameco President and CEO Tim Gitzel stated, “Market conditions have continued to strengthen since we announced their planned restart, with growing geopolitical uncertainty adding to energy security concerns worldwide, and the ongoing global emphasis on decarbonization and electrification only gaining momentum”. Also, Peninsula Energy Limited announced that it would restart its Lance uranium project operations in Wyoming.12 These corporate developments showcase the positive developments occurring in the uranium mining sector. We expect to see more project restarts as uranium market fundamentals continue to improve.

November’s performance for physical uranium and uranium mining equities has been in direct contrast to the strong fundamental supply-demand backdrop. The price of U3O8 uranium has lagged since May 2022, while conversion and enriched uranium prices have appreciated for both short- and long-term purchase contracts. We believe that the current demand for uranium conversion and enrichment, coupled with a shift away from Russian suppliers, supports a further increase in the U3O8 uranium spot price, ultimately supporting uranium miners.

The tension in the uranium markets is palpable. The unprovoked Russian invasion of Ukraine continues, and sanctions have yet to be on the deliveries of Russian uranium products and services. As the situation unfolds, Russian supplies to Western utilities may be in jeopardy, and this may have substantial impacts on the uranium markets. As Russia plays more of a dominant role in conversion and enrichment than in uranium mining, western enrichers will need greater amounts of uranium for their enrichment needs. Therefore in 2023, we expect to see a transition from “underfeeding” to “overfeeding” by enrichment facilities which in turn impacts further up the nuclear fuel chain by acting as a catalyst for the U3O8 spot market in the near term. We believe “available for sale” uranium inventories have mostly been sold, and we expect upward pressure may likely be exerted on the U3O8 spot price, potentially benefitting uranium miners. The confluence of these factors makes the uranium markets particularly sensitive to additional disruptions. We think that it is just a matter of time before the price increases seen in the conversion and enrichment markets are realized in other areas of the uranium markets.

We believe a new uranium bull market remains intact despite the challenging macroeconomic environment. There has been an unprecedented number of announcements for nuclear power plant restarts, life extensions and new builds that are all creating incremental demand for uranium. However, the current uranium price still remains below incentive levels to restart tier 2 production and greenfield development. Over the long term, increased demand in the face of an uncertain uranium supply may likely support a new bull market. For investors, uranium miners have historically exhibited low/moderate correlation to many major asset classes, potentially providing portfolio diversification.

In our view, physical uranium and uranium miners are well positioned to take share within the energy sector as energy security and decarbonization increase in importance. With the number of nuclear reactors planned to increase by 35%, governments are signaling the need to embrace the reliable, efficient, clean and safe energy produced by nuclear to meet ambitious decarbonization goals.13 At the same time, a uranium supply deficit remains entrenched, and uranium miners may be the recipients of increased investment, which may bring the market back into balance. 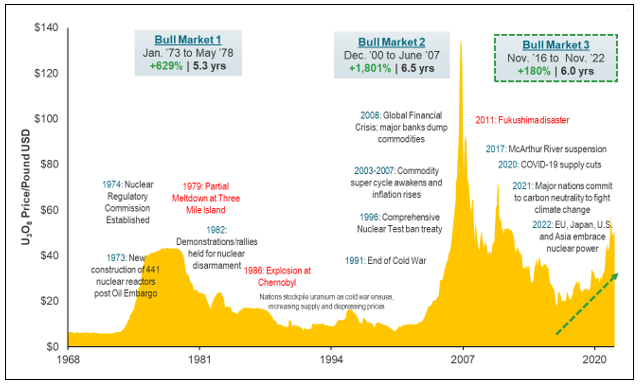