Part 1 in our palladium series provides a primer; Part 2 will explore the unique supply/demand fundamentals that support our bullish outlook.

Palladium: The White-Hot Metal Climbed 18% in 2018 and Doubled in Three Years

Palladium is close to becoming the most “precious” of precious metals. Palladium passed the $1,000 per ounce mark in late 2017 for the first time since 2001. Palladium’s momentum accelerated in 2018, with its $1,262 price-per-ounce edging close to gold’s $1,282 price by year-end.

Palladium was named by its discoverer William Wollaston in 1803, after the asteroid Pallas.

While the escalating U.S.-China trade war hurt many commodities in 2018, it couldn’t dent palladium’s rise. The white metal is primarily used in catalytic converters that reduce pollution from gasoline internal combustion engines (ICEs). Demand for palladium was especially robust last year, as environmental concerns have prompted a global shift from diesel to gasoline and hybrid vehicles. Not even the 2018 slowdown in China’s auto market, the world’s largest, dampened demand. 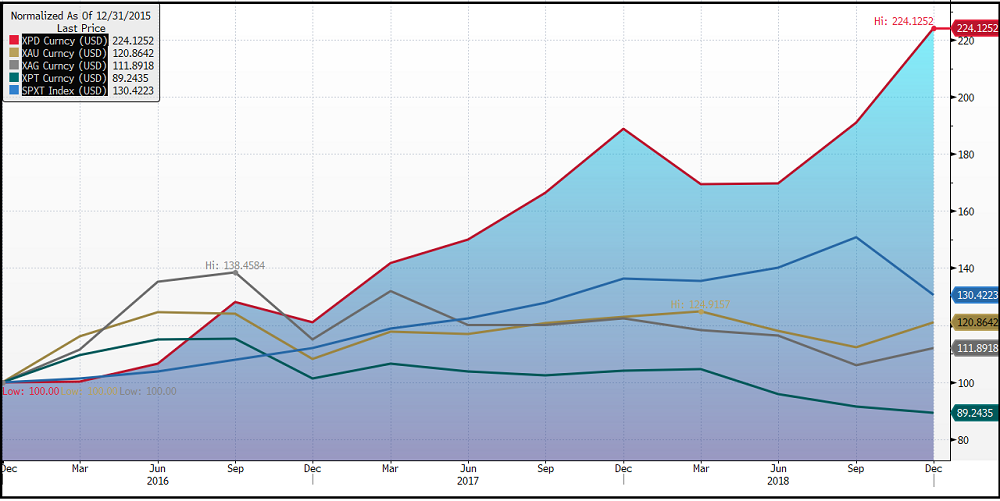 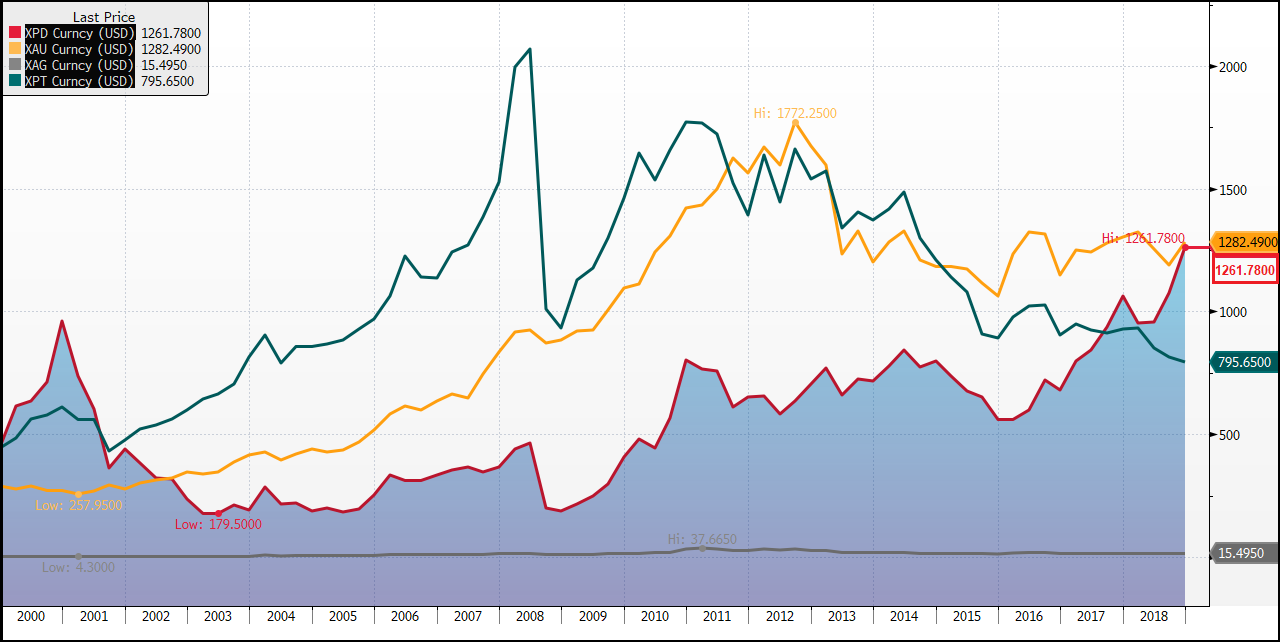 Palladium (chemical symbol “Pd”) is primarily used as an industrial metal and is considered a “precious” metal along with platinum, gold and silver. Both palladium and platinum are far rarer than gold and represent smaller markets. Recent world production of palladium and platinum has averaged about 200 and 175 tonnes per year, respectively, while gold production tallies approximately 3,000 tonnes per year (Read more about Platinum).

Also known as “white gold” or the “bright white metals,” palladium and platinum are members of the Platinum Group Metals (also known as “PGMs,” which also include ruthenium, rhodium, osmium and iridium) and typically co-occur in ore deposits. Their shared chemical origins give palladium and platinum similar characteristics, such as being relatively inert and having high melting points – part of their appeal as catalysts in industrial and automotive applications. 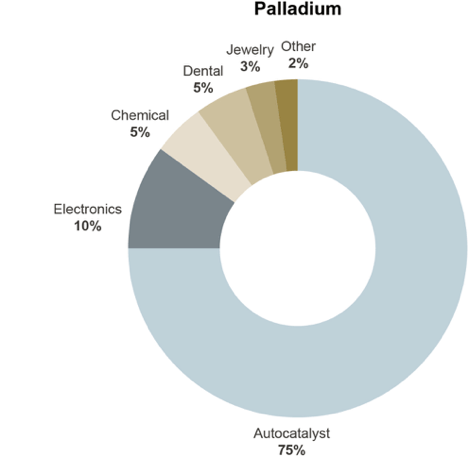 Automakers, who have little flexibility to produce cars without palladium, are being forced to push the price higher to secure their critical supply.

Palladium’s primary application is within the auto sector. Though historically more expensive than palladium, platinum was long the primary metal used in catalytic converters, partly because of its stability at the high temperatures required to achieve the conversion. However, in the past decade, automakers have developed technology to achieve nearly the same results with palladium, at a significantly lower cost, causing the automotive industry to transition to palladium.

While palladium is also used in jewelry, electronics, chemical and dental applications, the automotive industry’s need for catalytic converters is the primary factor driving palladium demand. If palladium’s price continues to outpace platinum’s, automakers may return to using platinum. However, analysts predict that any move back to platinum would take at least 18 to 24 months.

Supply shortages continue to support palladium’s performance, with strong multi-year growth in palladium demand now straining a fixed supply. Palladium is especially scarce and its supply is inelastic since it is usually a by-product of ores that are being mined for other metals, like platinum and rhodium. It is rarely mined on its own. Russia is the world’s largest palladium-producing country, followed by South Africa, Canada, the U.S. and Zimbabwe.

The official level of palladium reserves in Russia is a state secret and many industry participants believe that Russia’s stockpiles of palladium have been largely sold, constraining supply. Supply concerns were further heightened in April 2018 when the U.S. levied more sanctions against Russia. 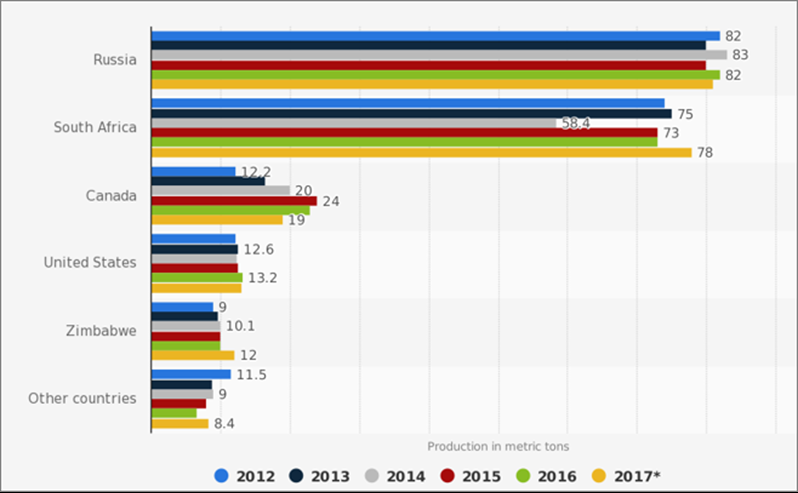 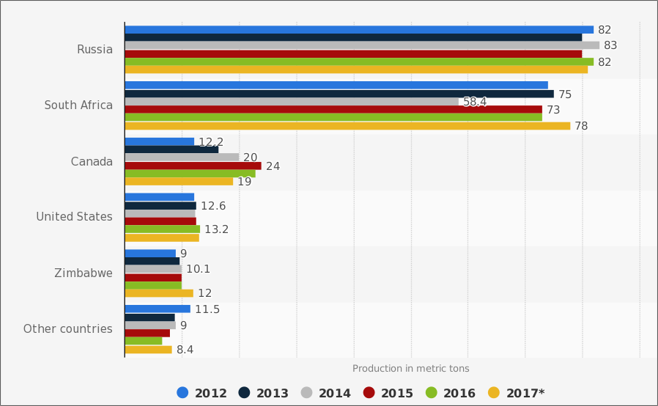 Global demand for palladium, net of the supply provided through recycling, was expected to reach 7.1 million oz. in 2018, exceeding a total supply of 6.9 million oz. This shortfall extends a seven-year trend leading to a current total deficit in the market of 801,000 oz., according to the chemical company, Johnson Matthey.2

While no country has outlawed new combustion engines, Norway, China and Germany, among many countries, have implemented frameworks to discontinue long-term ICE production and encourage demand for electric vehicles (EVs) and hybrid-electric vehicles.

The growth of EVs3 could pose a risk to the palladium sector since EVs do not require catalytic converters. On the other hand, the rise of hybrid-electric vehicles could drive palladium demand, since they too require palladium to control pollution. The mining company Norilsk Nickel forecasts that combined palladium use in hybrid and plug-in hybrid — or rechargeable — vehicles in 2019 will be nearly triple that of 2016. 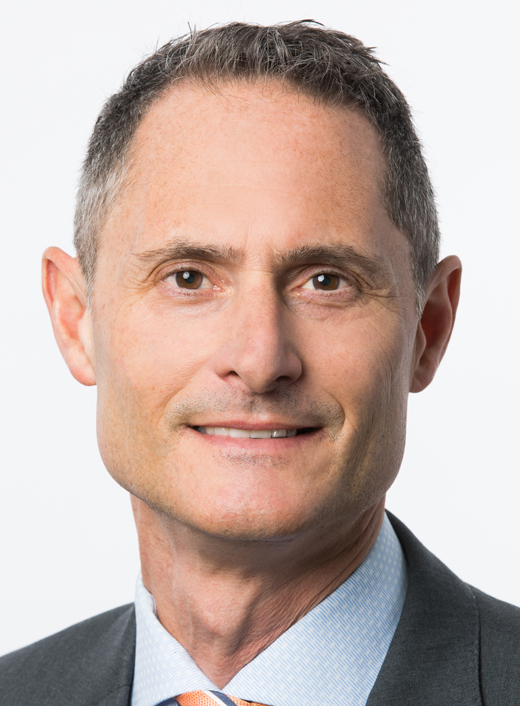